Nearly half a million children in the U.S. have pediatric epilepsy. What can be done to help them? 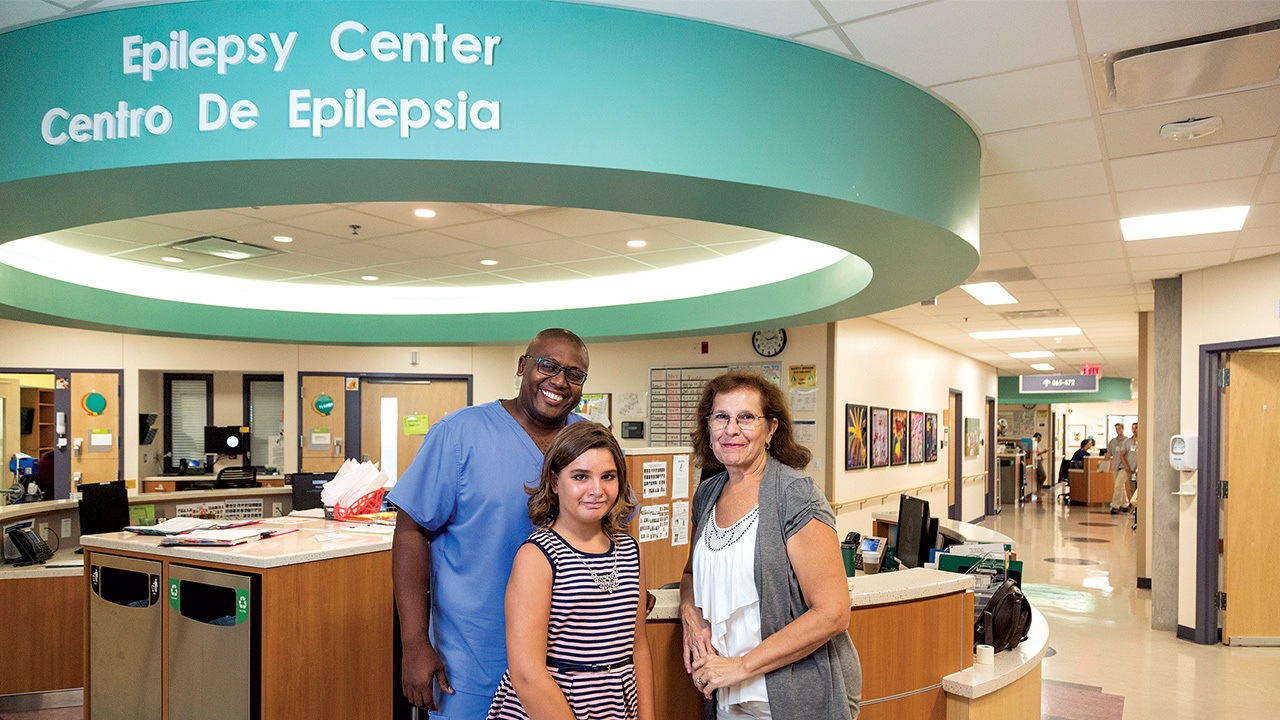 At 5 days old, San Antonio native McKell Konscol had her first seizure. There were many more to follow. In time, McKell and her family would learn that she is one of an estimated 2.9 million Americans — including 460,000 children — with epilepsy.

The neurological disorder typically results in seizures caused by abnormal electrical discharges in the brain. There are degrees of severity, and the impact of the disease varies. In McKell’s case, it brought difficulty with sleeping through the night — she often dozed off in school. She required an escort for most activities and missed out on simple childhood pleasures like riding a bike or rollercoaster. She couldn’t sleep on the top bunk, something she badly wanted to do.

At one point, McKell was taking four different medications, administered three times a day. For a girl with two older sisters, the contrast between a typical life and a life with epilepsy was painful.

The breaking point came five years ago, when McKell, then 7, fell into a pool during a seizure. She hit her head and was underwater long enough that she required resuscitation. It was a terrifying experience for McKell and for her family, but also one that started them on a path to healing after McKell’s doctor referred her to Dave Clarke, M.D., MBBS, director of the Comprehensive Epilepsy Program at Dell Children’s Medical Center of Central Texas and an associate professor in the Department of Pediatrics at The University of Texas at Austin's Dell Medical School.

Clarke discovered a tumor deep in McKell’s brain, which was surgically removed by the program’s co-director, pediatric neurosurgeon Mark Lee, M.D., Ph.D., FACS. After, McKell was seizure-free for the first time in her life.

Dr. Clarke and Dr. Lee saved McKell’s life — they gave her her life back. To me, it’s absolutely miraculous, to go from 30 to 40 seizures a day ... to zero seizures and a long-term prognosis of a cure.

REthink sat down with Clarke and McKell’s grandmother and guardian, Joy Martin, to talk about their experiences.

REthink to Dave Clarke: What’s the prevalence of pediatric epilepsy?

DC: Epilepsy is one of the world’s oldest recognized ailments. It is sometimes genetic, but other causes are infection, inflammation, trauma, atypical formation or lesions of the brain. Approximately one out every 100 children under the age of 20 has epilepsy — it is the fourth-most common neurological condition.

Epilepsy affects every aspect of a patient’s life, as seizures are unpredictable.

REthink: Talk about McKell’s case. What were her treatment options?

DC: McKell had already tried multiple medications. If two chosen medications have failed to control seizures, only about 5% can be controlled if another medicine is attempted, so other treatment has to be considered.

Our specialists worked together to determine if her seizures were coming from only one area and to ensure that removing the region wouldn’t cause harm. Ultimately, we decided that surgery could help to significantly reduce or stop McKell’s seizures.

Afterward, McKell was seizure-free for six months, but they began again when we started withdrawing medication. A subtle abnormal area deep within the brain remained, but attempting to remove it could have injured normal tissue. Fortunately, she was able to undergo a procedure done in few children’s hospitals: laser ablation. A thin catheter is placed through a 3-millimeter hole and a laser is used to eliminate the abnormal area while sparing normal regions. The procedure was a success, and McKell has not had seizures for several years.

REthink to Joy Martin, McKell’s grandmother: Tell us about your experience at Dell Children’s.

JM: I didn’t know this kind of testing was even possible. I didn’t know there was anything else out there, other than seeing the doctor and getting on medication. Dr. Clarke and Dr. Lee saved McKell’s life — they gave her her life back. To me, it’s absolutely miraculous, to go from 30 to 40 seizures a day, not knowing what’s wrong, trying four medications, to zero seizures and a long-term prognosis of a cure. It’s unbelievable! 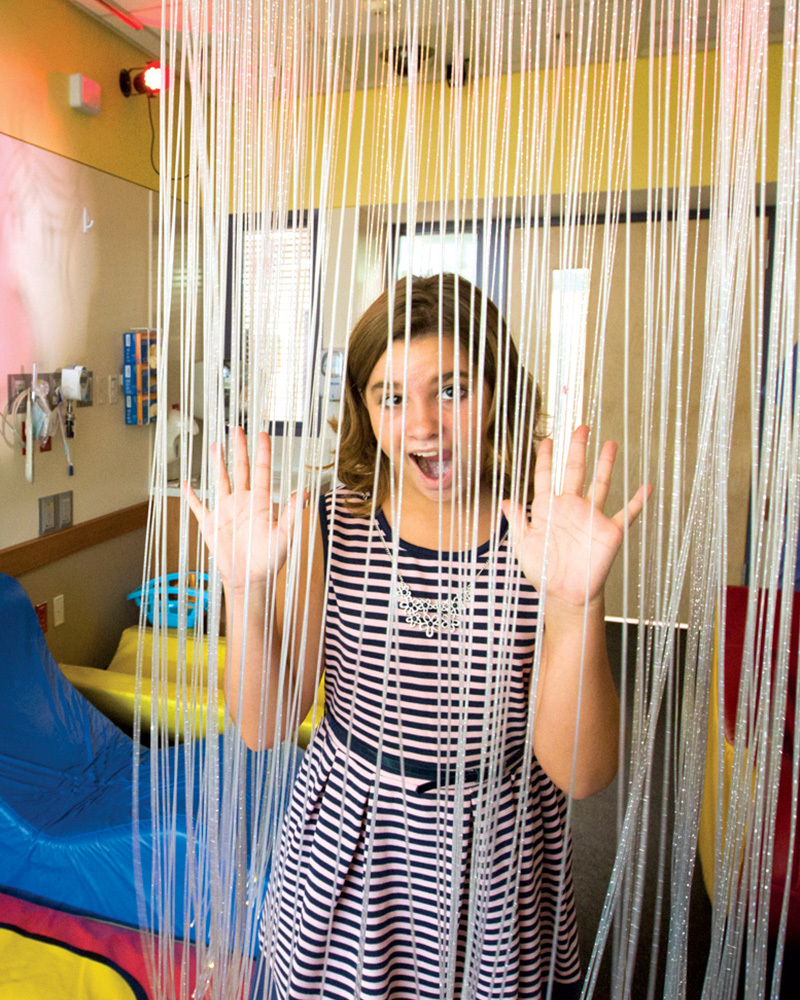 REthink: How is McKell different now?

JM: She used to be very angry all the time — and difficult. The changes in her personality are phenomenal. Even her laugh is different.

REthink to Dave Clarke: What other treatment options are available?

DC: Not all children are candidates for surgery. In many cases, if medication fails, options for reducing seizures include a special diet called the ketogenic diet; a nerve stimulator device implanted in the chest wall; or a corpus callosotomy to prevent the spread of seizure activity by disconnecting the two halves of the brain.

REthink: What’s being done to improve outcomes for epilepsy patients?

DC: National and international organizations advocate for better epilepsy care. Unfortunately, epilepsy centers with the expertise to provide all aspects of epilepsy management are rare. There is a lack of knowledge at many levels of health care about options for treatment. These factors create a huge deficit in care. The National Association of Epilepsy Centers estimates that only 22% of individuals who should be seen in specialized centers are evaluated there.

REthink: How is Dell Med a player?

DC: At the Dell Children’s epilepsy center, we realize the need to address not just the seizures, but the whole child. We focus on all aspects of epilepsy care: clinical care, education and research, which includes contributions from Dell Medical School faculty and the school’s Department of Pediatrics. Our clinical approach includes medical, surgical, cognitive and social management specialists convened in one space. We research new medications and devices and use novel investigative tools to evaluate cases.

REthink: What could be done to accelerate progress?

DC: There is urgency for maintaining and growing the program. We risk delays in care as we grow and work to address systemic deficits in epilepsy care and education. We need staff — social workers, nurses, researchers, technologists, etc. — to provide comprehensive care. We also need resources to update our state-of-the-art equipment. This is all done to achieve the goal of no seizures, no side effects and improved quality of life for patients.

REthink to Joy Martin: How would you describe Dr. Clarke?

JM: He’s got a passion for what he does and for these kids. You can ask him anything and boom — he’s right there with an answer. He’s got a way of portraying his vision so that you can catch it and get on board. Dr. Clarke and his team saved McKell’s life, and it’s because of this groundbreaking work that they’re doing here.