The COVID-19 pandemic left medical schools with little choice but to adapt. A year and a half in, leaders explore what changes might be for good. 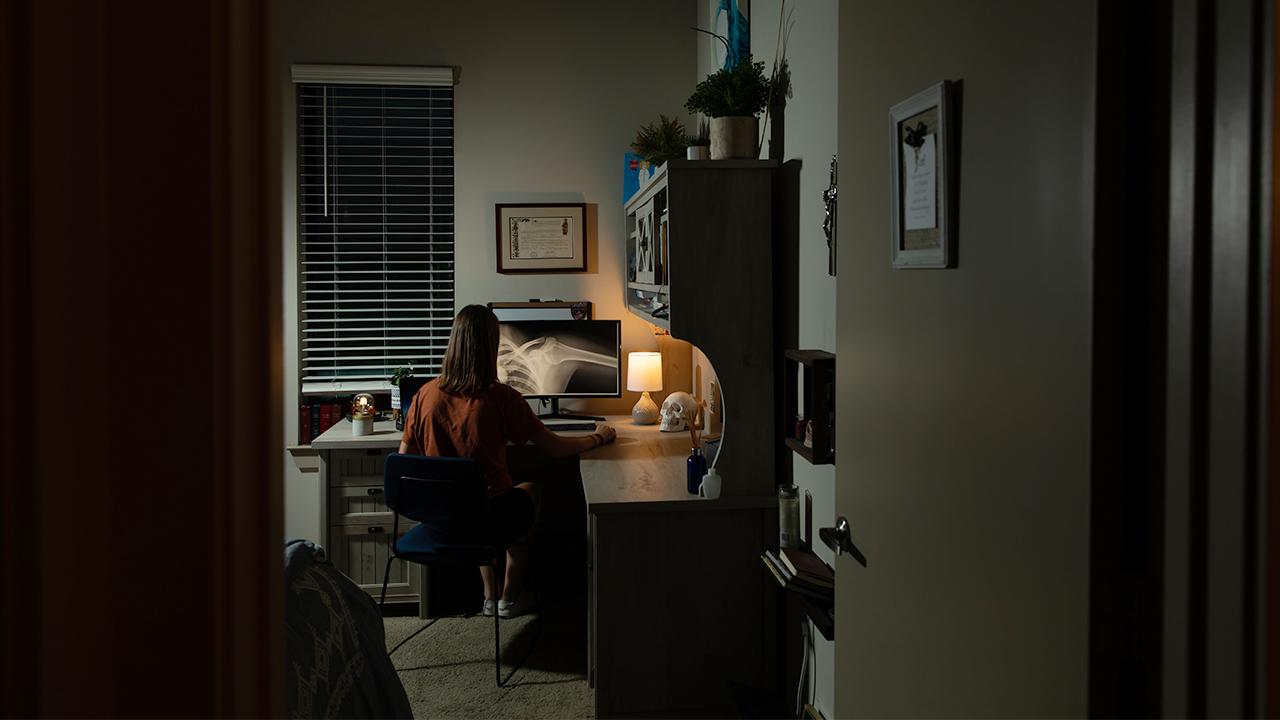 Dell Med student Faith Noah in her home office. Noah was a second-year student assigned to a surgical rotation in March 2020, when the World Health Organization declared COVID-19 a pandemic.
BY Mary Kincy Cope | September 2021
SHARE THIS ARTICLE

Faith Noah isn’t a morning person, but on March 13, 2020, she was keyed up for her 5 a.m. hospital shift. Then a second-year medical student assigned to a surgical rotation, Noah had been watching the news with growing concern.

“I thought to myself, I’m not sure how much longer we’ll have our normal clerkship experience,” she says. After a routine observation in the operating room — a cholecystectomy, surgery to remove the gallbladder — she and other students were approached by instructors. “They told us, ‘Go home. We don’t know when you’ll be back.’”

Noah, 25, was one of thousands of U.S. medical students who were pulled from hospitals and clinics — their classrooms — as the COVID-19 pandemic swelled from early hotspots in New York City and Seattle to engulf the coasts, then the country. Suddenly unable to send students on rounds or into operating rooms, faculty and administrators at Dell Medical School and other academic medical centers spent countless hours recording lectures, rethinking skills training and updating curricula. But their predictions vary on whether these months mark a true watershed for academic medicine.

Sherine Salib, M.D., is an internist who played a central role in authoring curricula and policies for Dell Med, founded in 2014. She and three other professors used the disruption caused by COVID-19 to introduce an elective course focused on transitions of care, when patients move from one setting to another, such as from a hospital to home. The pandemic exacerbated issues with these transitions, already complex and often fraught with errors.

“At Dell Med, we teach our students to be what we call ‘systems-ready’ physicians, meaning they’re not only able to practice effective medicine, but they also know how to function in the medical system, with all its complexities,” Salib says. “And understanding transitions of care is an important part of being a systems-ready physician.”

The new elective was one of several of its kind, focused on important concepts that could be readily consumed in a virtual environment. “One of the biggest lessons we learned was just how creative we can be,” Salib says. “Going forward, we need to continue to explore that flexibility in curriculum building.”

We had to really reinvent how medical education was done — what we were teaching, how we taught it.

Flexibility is what Sue Cox, M.D., Dell Med’s executive vice dean of academics, is talking about when she refers to “the pivot.” Cox and other education leaders moved all pre-clinical coursework online in the two-week spring break that The University of Texas at Austin announced in response to the pandemic.

“We had to really reinvent how medical education was done — what we were teaching, how we taught it,” Cox says. It was a special challenge at Dell Med, which focuses on team-based learning, with classroom time used for collaborative discussion of case studies. But Cox found that even progressive, peer-to-peer learning models like Dell Med’s can work in a virtual environment, and her experience is supported by evidence: Student performance on licensing exams is flat, year to year.

Getting the Job Done

The necessity of all this invention can still feel like a burden, if not an impossibility. Alison Brooks, M.D., is a clerkship director in the Department of Women’s Health at Dell Med, teaching students the fundamentals of obstetrics and gynecology. OB-GYN was the first of Dell Med’s clerkships to bring students back in person, in June 2020, in large part because of the challenges of demonstrating — and delivering — perinatal care virtually. Before the return, Brooks met with students on Zoom to walk them through cases or to show demonstration videos sourced from professional organizations.

“I would talk through a hysterectomy step by step, following the video,” she recalls. “And I was able to prompt students’ involvement in the same way that we would in an operating room. But I don’t know if I was particularly innovative. Like a lot of people, I just had to figure out how I could get the job done.”

Sometimes you have to navigate things that are unknowns, and you do the best you can with the team around you.

Though resident physicians continued to work through the pandemic, they too faced challenges to their training as doctors: Through the summer of 2020, elective procedures were frequently suspended to protect hospital capacity. And many gynecological procedures are classified as elective.

Dell Med’s residents have still been able meet national guidelines that dictate the minimum training necessary for graduation. But it’s been a headache: “It’s meant more navigation­ — figuring out which resident might need more hysterectomies, for example, and then designing their schedules so that they can actually get the clinical experience that they require,” Brooks says. She suspects the long-term impact of the pandemic on trainees will be significant; these will be masters of adaptation in a profession that has long demanded flexibility. “Sometimes you have to navigate things that are unknowns, and you do the best you can with the team around you. These doctors know that better than anyone now.”

A year and a half later, as the delta variant underscores the pandemic’s unpredictability, Noah is back in the hospital for fourth-year rotations. She recently completed a master’s degree in public health — all online — and will spend September working in the intensive care unit, enabled by the easy availability of testing, personal protective equipment and vaccines. She’s ready for the pivot back.

“I thrive when I don’t know exactly what to expect. I’ve learned a lot of concepts of public health, and I’ve seen now what it looks like when you’re trying to convey those messages, to teach people about disease spread and preventative measures,” she says, pausing. “But it’s taking on a very real lens.”