Med Ed for the Next Century

In an age of surgical robots and artificial intelligence, how do you create the medical school of the future? 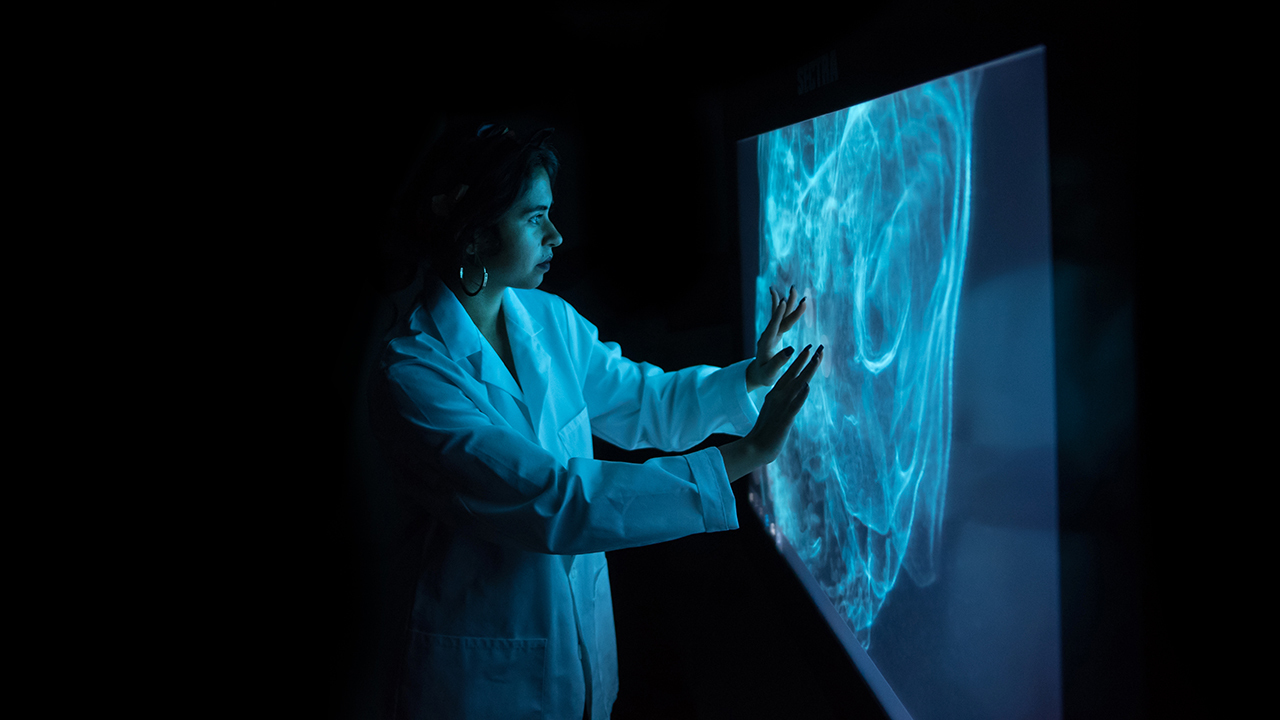 Ananya Roy, a member of Dell Med’s Health Leadership Apprentice Program, tries her hand at manipulating an image of a heart on the school’s SECTRA, a tool for visualization of anatomic renderings.
BY Mary Kincy Cope | May 2019
SHARE THIS ARTICLE

One of the newest medical schools in the country, Dell Medical School at The University of Texas at Austin, has a laboratory with a wall of windows overlooking the busy street that borders the Capitol just a few blocks away.

At 7:18 on a Friday night, it’s dark enough inside that the metal tables where cadavers sometimes lie fade from view. There’s a screen visible. A student approaches it, and a camera shutter clicks. The image that’s captured is moody and dramatic: a lone woman manipulating a cold, blue heart on a massive, glowing monitor. It’s a scene from the medical school of the future, but — as it turns out — it’s not very emblematic of Dell Med, with its focus on team-based learning, self-discovery and engagement with community partners.

“From Day 1, our students are working in teams to solve problems, whether in the classroom through case studies or in the hospital during clerkships,” says Beth Nelson, associate dean of undergraduate medical education. “We’re focused on building skills in communication, collaboration and leadership, so that when students graduate they are prepared not only to care for individual patients but to take on systemic challenges to health.”

‘Envisioning What the Future Should Be’

The curricular model at Dell Med is called the Leading EDGE, highlighting the focus of each year of study: essentials, delivery, growth and exploration.

Grounded in value-based care and health systems science, it begins by accelerating the preclinical curriculum so that by the second year, students are prepared to enter clerkships and apply clinical skills in hospitals and clinics.

Then comes an Innovation, Leadership and Discovery block in which students plan and lead collaborative efforts to tackle community health challenges. They have the option to pursue a research, population health, health care design or entrepreneurship interest. Alternately, they can pursue a dual degree — an MBA, MPH, MEd or a master’s in Biomedical Engineering, Health Care Transformation or Design in Health.

The idea is that as Dell Med and other schools demonstrate the effectiveness of new practices and procedures, other schools will start to embrace changes, if only to remain competitive.

“We carve out this nine-month block to give students a chance to take a deep dive into different aspects of the health ecosystem,” Nelson says. “We’re preparing them to understand the challenges to health so they can begin envisioning what the future should be — and how they can make it happen.”

The approach, while unique, puts Dell Med in a class with a handful of other medical schools across the country shifting curricula to align with contemporary learning theories — and contemporary challenges to health.

“As our understanding of health and human flourishing has evolved, the need for physicians to be trained across multiple dimensions has become critically apparent,” says Bonnie Miller, an associate dean at Vanderbilt University School of Medicine. “All physicians must have a better appreciation of the system-level issues that promote or impede high-quality health care delivery and healthy communities, and cadres of physician leaders must be trained in areas ranging from basic science research to population and community health to engineering and device development. All must possess a creative and entrepreneurial spirit while also modeling the core values and attributes of the medical profession.

“Over a very short period of time, Dell Med has become an exemplar of the forward-facing medical school that embraces this vision and the attendant educational responsibilities and demonstrates to other schools how it should be done.”

‘We See It as Our Responsibility’

Modern medical education has its beginnings in the Flexner Report, a study published in 1910 that called for more stringent admission and graduation requirements and set standards for curricular adherence to mainstream science.

More than 100 years later, what would later be called Dell Med found itself with an unusual opportunity in 2011, when a team led by Sue Cox began building a vision for undergraduate medical education in Austin.

“It was the kind of thing you think about but never expect to be able to do,” says Cox, who headed the UT Southwestern Medical School residency programs based in Austin before becoming Dell Med’s executive vice dean of academics. “Free from the restraints of an established curriculum, we could design an educational model aligned with efficacy rather than history. It was a chance for change across the board, from the way we teach to the competencies we prioritize.”

By 2016, when the first class of 50 students arrived — chosen from 4,500-plus applicants — the vision had matured to an innovative approach that consciously deviates from traditional curricula focused on medical knowledge and memorization. Instead, students engage in collaborative, experiential learning that builds skill in critical thinking and prioritizes thoughtful engagement with health challenges.

Clay Johnston, dean of the school, explains why: “It’s our responsibility to prepare students to meet the challenges of a rapidly changing health care system, shifting away from a dysfunctional status quo and toward society’s interest in health.”

Proof of Concept in Step 1 Results

An early indicator of success for Dell Med is the performance of the first cohort of students taking Step 1 of the U.S. Medical Licensing Examination.

In 2018, the mean national average score was 230. In that same round of testing, Dell Med students earned a mean average of 244 — results on par with those of the top-performing schools in the country, including Harvard Medical School, Baylor College of Medicine and the UCSF School of Medicine.

“A lot of people predicted that our students’ board scores would decline because we were reducing ‘testing to the test’ and time focused on memorization,” Johnston says. “I told them we didn’t really care because our students were learning more important things. As it turns out, we saw no sacrifice in test scores — just the opposite.”

Overall, Dell Med students exceeded the national mean in every subject area tested, and all of them earned a passing score on their first attempt.

“This is evidence that our curriculum is giving them a strong foundation in the science of medicine,” Nelson says. “It’s the beginning of proof of concept for us."

Dell Med’s focused admission process looks for skilled collaborators ready to conduct intense, mutually supportive work in a pass-fail structure. Aside from evidence of the aptitude and stamina required by an accelerated curriculum, a series of encounters with diverse interviewers and a preliminary video interview identify personal attributes like resilience and adaptability, life experience, and capacity for mission contribution. 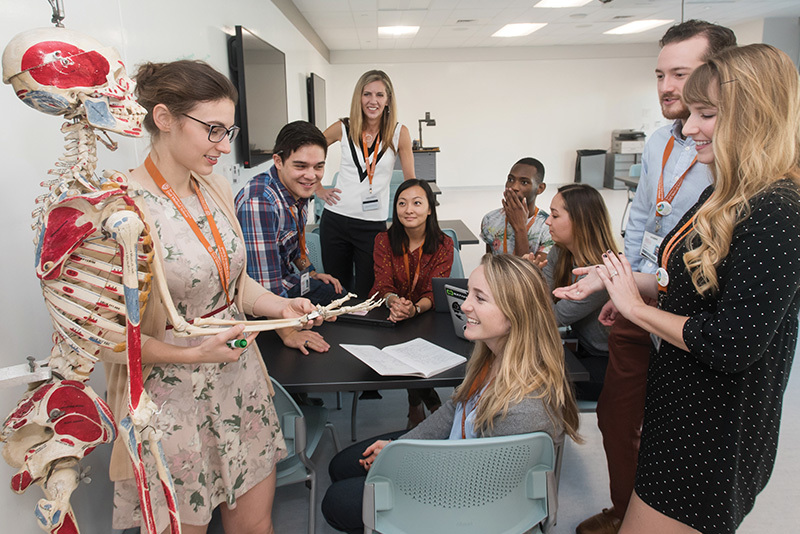 Sharmila Paul, a first-year student, recognized the connection between her experiences as an applicant and as a student almost immediately. “Dell Med’s faculty understand that clinicians need to work within — and, ultimately, lead — highly functional teams,” she says. “That dynamic constitutes the connective tissue of the entire Dell Med experience, and it started in those initial interviews.”