Meeting People Where They Are

A mobile team is redefining care for people experiencing homelessness in Austin. 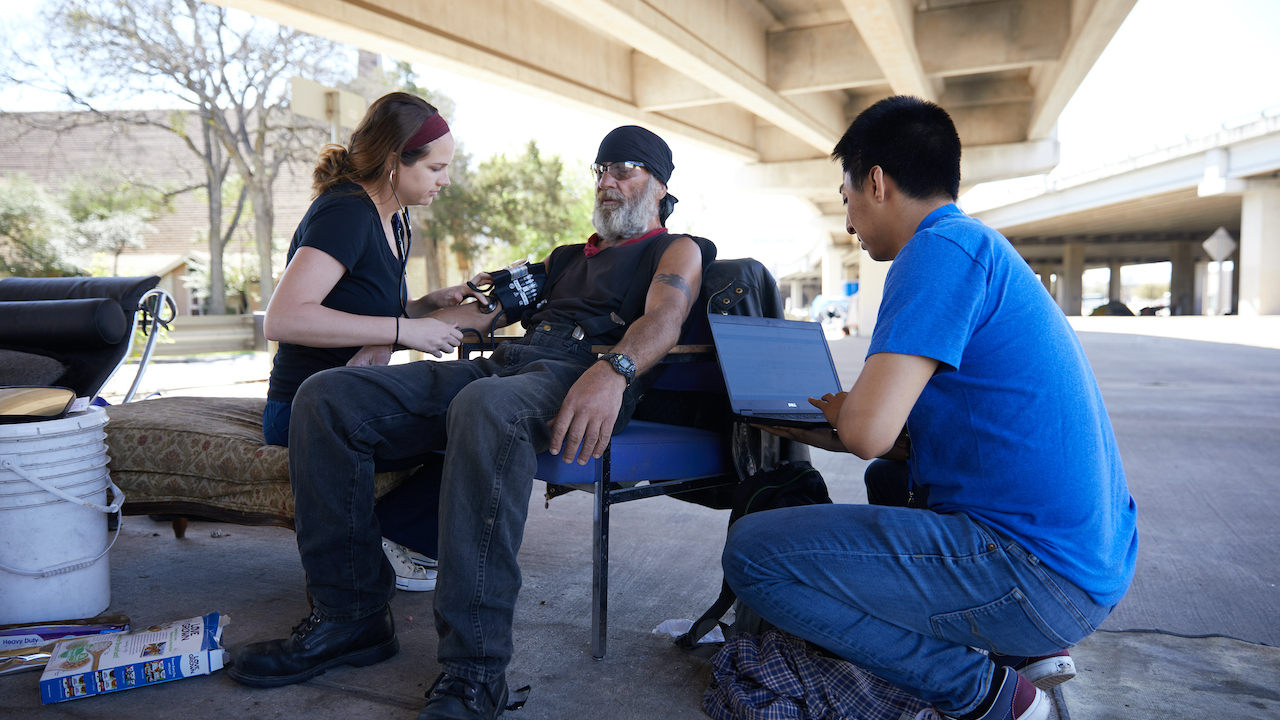 The weekly meeting of the Mobile, Medical and Mental Health Care Team — known as the M3 Team — sounds like what you might hear when listening to doctors doing rounds in the hospital: Team members run down a list of patients, noting their progress and planned medical treatment.

But much of the information that emerges from this meeting is of an entirely different sort: One patient is without a mobile phone right now and will be hard to reach this week. Another hasn’t been seen in some time, but a member of the team chimes in with a tip that he may be staying under an overpass on the city’s south side. Each case manager and clinician weighs in on who has last seen whom, where they were and how each person’s circumstances will affect the near-term treatment plan.

And for patients like Gary Bruce, 60, this is the type of care that has made all the difference.

“These people have probably saved my life,” Bruce says. After decades of substance use and 13 years living on the street, he was referred to the M3 Team and has now lived in stable apartment housing for nearly a year.

“I was abused as a child, began shooting drugs when I was 17 and now have congestive heart failure,” he says. “When you’re homeless, you don’t get mail, you don’t have a cell phone and you’re outside when it’s 28 degrees. It’s impossible to get help; it’s a nightmare. But now I have the best counselor in the world, and this team has helped me so much I don’t think I can explain it.”

The M3 Team, a partnership between Dell Medical School, CommUnityCare Health Centers and Integral Care, is led by Tim Mercer, M.D., an assistant professor in Dell Med’s departments of Internal Medicine and Population Health, and is funded by a grant from the Substance Abuse and Mental Health Services Administration.

The team focuses its efforts on a population that meets four very specific criteria: patients who are chronically homeless and who have a persistent medical condition, substance use disorder and serious mental illness. It’s an example of the new models of care that are possible when organizations are able to bridge gaps and integrate their specialties all in a singular focus on one person: the patient.

"One of the roles Dell Med can play in this community is a convener — not necessarily be the expert in everything or do everything,” Mercer says. “It was important for all three partners to come together and bring their own expertise and infrastructure. We’re trying to create a care model for some of the most complex, marginalized groups in our community.”

The better part of a year was spent preparing to launch the care team to ensure smooth operations, such as data brokerage agreements, hiring, training and creating referral forms, evaluation metrics and measures.

Since the team’s August 2019 launch, more than 100 patients have been referred, with 45 enrolled in care and 20 navigated into stable housing situations. Three of the team’s clients have died — an incidence rate which Mercer notes is shocking, yet realistic for this at-risk, often very sick population. And one client has “graduated” from the program — reaching a level of physical, mental and social stability that they can begin to rely on more mainstream services.

The team’s relationship with its enrolled patients is intensive by design, with an average of two or three touch points per patient each week — ranging from phone calls to visits to accompaniment to appointments. The care is integrated, meaning one team coordinates patients’ primary care, behavioral health care and support with health-related social needs like housing and nutrition assistance. Points of contact across the team change depending on circumstance: If a client is about to have surgery, for example, a nurse manager may be their most frequent contact that week.

“I take care of many patients who are experiencing homelessness, and when I have a patient who’s a client of M3, it’s a totally different story — they make their appointments, they have continuity of care and they’re spending less time in the hospital,” says Audrey Kuang, M.D., assistant professor at Dell Med and associate director of community engagement and health equality for CommUnityCare Health Centers. Kuang, who specializes in caring for people who are experiencing homelessness, is one of the care providers on the M3 Team. “Teams like this prove what we know: The medical stuff usually comes second. People need housing and stability before they can tackle heart disease and diabetes.”

Kristi Kaiser, the M3 Team’s program manager through Integral Care, has worked with people experiencing homelessness for some time but never with a shared caseload model like the one M3 uses. With providers who are often just as mobile as their patients, Kaiser says her work to coordinate the team is challenging — but it opens doors for patients who are facing an uphill battle with siloed care systems in a city with limited affordable housing resources.

Challenge: Parts of the system don’t communicate well with each other.

One client needed hip surgery for a while. Prerequisites for the surgery — attending numerous pre-op appointments, cutting tobacco use and managing other conditions — were difficult for him to meet while living in a tent. It took the larger group of partners, facilitated by the M3 Team, talking to each other to get the patient admitted to the hospital and, from there, a rehab facility where preparation for surgery was possible. The patient successfully quit smoking, received the needed surgery and is now in stable housing.

A group of three individuals who identified as a chosen family wanted to stay together with their dogs, which complicated attempts to seek stable housing. By building a rapport with the group, the M3 Team was able to ensure continued engagement with care and navigate everyone — dogs included — into housing last year.

“We trust our clients when they tell us what’s important to them,” Kaiser says. “Rather than approaching them as ‘the professionals’ saying, ‘We really think you’d be better off if you just did X, Y or Z,' we believe them when they communicate their priorities. It’s things like that that go a long way in building rapport so that we can continue to care for these individuals.”

A Model for the Future

Along the way, the team is evaluating the care delivery model with measurements like patients’ overall health care utilization — for example, are they visiting the ER less — as well as outcomes reported by patients themselves. The evaluation team, including Dell Med’s Justin Benzer, Ph.D., and Maria Correa, have been with M3 since the beginning; because of that, they’ve been able to gain intimate insight into possible barriers to both the clinical and social work, as well as advance quality improvement projects along the way.

Quality improvement since the team’s launch has notably involved tackling the housing process itself — creating a way for everyone to more easily navigate the complex, obscure steps to securing stable housing.

“At times you have to call in repeatedly, like you’re on a radio show, just to get on a single waitlist, and from there you could still be waiting six months to actually get housing,” Correa says. “So even the resources that are out there are hard to reach. Our clients have our team to help them, but for others, it’s challenging. The spirit of our team has been that yes, we want to improve it for our patients, but ultimately it’s a model: We want to improve it for everyone.”