Charles Fraser built the top pediatric heart surgery program in the country. Now, he’s readying to do it again, from scratch — and Central Texas and its tiniest, neediest hearts stand to benefit. 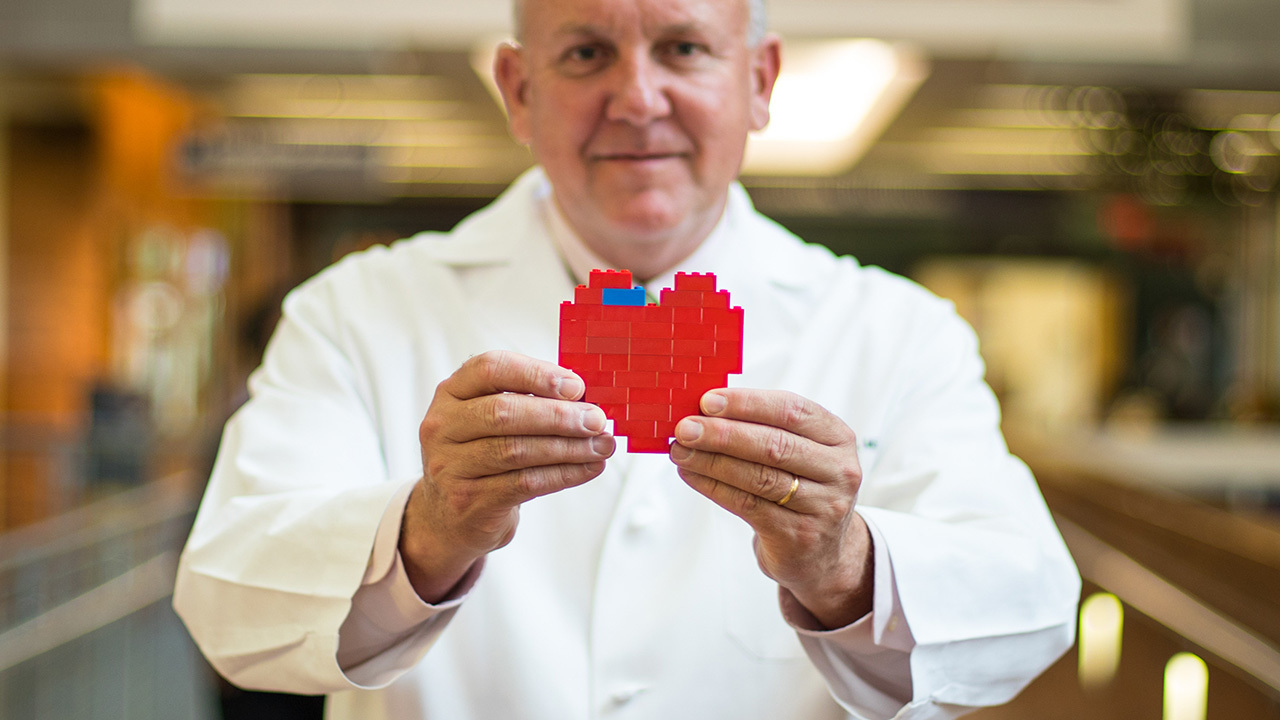 What do you do after you’ve built the best pediatric cardiology and heart surgery program in America? Well, if you’re Charles Fraser Jr., you do it again.

Fraser, M.D., arrived in Central Texas and at the four-year-old Dell Medical School at The University of Texas in March. He met with REthink earlier this month to talk about his transition to Austin, why he chose it (and Dell Med) for his next act, and his plans for the community’s tiniest, neediest hearts.

REthink: When your move to Austin was announced, you told the Houston Chronicle, “I think I have one more big build in me.” Talk about that.

CF: I have had this lingering sense that my work here on this earth is not finished. I guess people might call it wanderlust — a sense that I’ve got more to do. I’m not looking to stumble across life’s finish line; I want to sprint. So, I’ve been looking for the next opportunity, the next challenge to do something meaningful. This is it.

REthink: Obviously, you’ll be focused on creating here a pediatric cardiology program marked by excellence, just as you did in Houston. But what will you do differently in Austin?

CF: I’m hoping that I’ll be wiser about how we execute on the mission. One of the things that I know we should do better in all of medicine is to take better care of each other as caregivers. The environment in a pediatric cardiac unit is very intense; it’s emotionally wrenching, physically demanding and, at times, confusing.

If the caregivers become unhealthy, they become mentally fatigued, they become spiritually fatigued, they become physically burdened — there’s no way that a person like that can be at the top of their game. It has always puzzled me why people don’t make the connection that an unhealthy caregiver environment translates into a higher-risk caregiver environment. It is understandable that there are medical errors happening around us all the time. Many doctors will tell you, “The best place you can be — it’s not in the hospital.” We have a chance to make that different at Dell Med. We're starting with a blank canvas.

REthink: The Texas Center for Pediatric and Congenital Heart Disease, which is the name of the program you’re building, is the result of a partnership between UT Health Austin, Dell Med’s clinical enterprise, and Dell Children’s Medical Center of Central Texas. Talk more about how Dell Med’s mission to revolutionize how people get and stay healthy, specifically through the creation of new models of care that reward value, resonates with you.

CF: The reality for most patients — or families of patients, in the case of children — is that they don’t question what they’re getting in terms of health care. The patient just accepts that his or her best interests are being attended to. And, by and large, they are. But in medicine, we tend to be event-centric: We’re going to have a colonoscopy. We’re going to have a mammogram. We’re going to have a heart transplant. Everything gets built around the event. But what are the outcomes for the event? Those outcomes are usually measured on a short-term, objective level. For example, in my field, historically, the outcome measure that’s been used has been mortality. You live or you die.

I met this morning with a family — pregnant mother, father, they’re wrecks because their child, at 29 weeks’ gestation, has a diagnosis of critical heart disease which is fatal without treatment. The first question the mother asks is, “Is my child going to be normal?"

Well, by and large, we can’t answer all of that. But that’s what people want to know. That’s what they deserve to know — what is the likelihood is of an outcome, and what does it cost to get it. That’s value.

When I sit with a family and they ask me those questions — can the child have a good life? — it bothers me a lot when I can’t answer. Because often, the reason I can’t answer is not because the answers are not “getable” — the reason is we have yet to measure them somehow.

REthink: Beyond a philosophical alignment with Dell Med’s mission and the opportunity to tackle one more big build, you’ve said that this move was attractive to you because it brought you back to Austin and to your undergraduate alma mater. What’s special about this place, and why did it mean so much to you to return?

CF: Well, of course, I have a core personal, familial bond to Austin and to The University of Texas. [Fraser graduated from Texas in 1980 with an undergraduate degree in mathematics before earning an M.D. from the University of Texas Medical Branch in Galveston.] I think this is the greatest public university in the country, but not having a medical school was a huge deficiency.

Consider all the things that have come together in the last decade: a new medical school — a visionary medical school, admittedly an experiment — the burgeoning Austin, Texas, population. The convergence of resources and creative opportunity may be very close to unparalleled in the country. This all came together, in my mind, in a very amazing providence.

Deep in the Heart

REthink: Not to stray too far off topic, but now that we’re talking Austin, there are certain questions that have to be asked: barbecue or breakfast tacos?

REthink: The Broken Spoke or the Continental Club?

REthink: Best Austin attraction: 1.5 million bats taking flight from the Congress Avenue Bridge, a Longhorns football game or live music at Stubb’s? We can probably agree that all are good for the heart, at least in its metaphorical sense.

REthink: Back on topic, what’s the significance of what you’re building here in Austin to those who don’t know anyone affected by pediatric or congenital heart disease? Is the idea that a rising tide raises all boats?

CF: Absolutely, because the principles I’m talking about transcend heart disease. We all know, sadly, that we’re going to get sick in life. Some of us are going to get really sick. We should expect, in a great city like this, that we are in the top tier in all aspects of the care continuum.

That’s not to say that there aren’t some great things going on in Austin in medicine, because there are. There are some really terrific doctors and institutions. But there are some things that aren’t happening here. I think that if you can get a program like ours right, there is a natural synergy and momentum that fosters confidence in developing other programs. We saw that in Houston and frankly, I’m already starting to hear about it happening here. Some of the things that we’re working on will just, by nature, benefit other programs. We know the heart team can’t function in isolation. We have to have all these relationships and synergies that help us do what we need to do. So, yes, it is a “rising tide” scenario sometimes.

REthink: Are there implications for other cities? Dell Med envisions Austin as a place where new models are tested and proved, presumably so they can be adopted elsewhere. Is that a possibility, or even a goal?

CF: Yes. Let me tell a story. If you could get in a time machine and travel back to 1885, you would find a leading philanthropist who decided that he was going to give back to society in a very meaningful way. He gathered a core group of founders, small in number, who said, “Health care and the education of doctors and residents is not in the best place it could be. We’re going to rethink this. We’re going to ‘rethink everything.’

Fast-forward to today, and we call that place Johns Hopkins. It became the model.

If we don’t do something here in Austin that’s different, that 100 years hence, someone says, “that was a transformational moment,” then we haven’t been good stewards of all those resources that I enumerated earlier.

REthink: So, in addition to being a visionary, you’re an incredibly talented and experienced surgeon. I read somewhere that you’ve performed more than 16,000 congenital cardiac repair surgeries in children. Will you continue in the O.R. in Austin? If so, on what scale?

CF: I’m actually probably going to operate more in Austin than I did in Houston. I’m at a sweet spot in my professional work as a surgeon in terms of experience and clinical skills. So, absolutely, I’m going to be doing a lot of surgery. I’m going to have really good colleagues, too — we’re going to have strong team in the heart program.

REthink: Overall, what does pediatric and congenital heart care look like here in 10 years?

CF: Well, we want to work on moving from episodic care to a continuum of care, so that patients understand where they’re going, understand what the process is going to be, and don’t feel like they’re lost in an undecipherable system. We’ll be building out a dedicated team of top-performing individuals and we want to hold them to a high standard, but we also want to take care of them. We want to foster an environment that is respectful, dignified, pleasant, calm, reassuring, safe, predictable. We want to educate tomorrow’s leaders. We want to conduct responsible translational research that’s problem-focused.

But we can’t do everything. The priority will be to build a program that extends from fetal to advanced-age adult care for people with congenital heart disease and that doesn’t have any deficiencies. Right now, the whole system has deficiencies. For example, we [in Austin] don’t do fetal surgery. We have to fix that. We don’t do pediatric heart transplants. We have to fix that. We have to establish state-of-the-art care here, and then — once we’ve done that — we can push the margins, push the boundaries in innovation and creativity.

I said this to a group yesterday: I want no patients to have to leave the greater Austin area because they can’t get the care they need right here.

This interview has been condensed and edited for clarity. For more information about the Texas Center for Pediatric and Congenital Heart Disease, call 855-324-0091.