When the oldest medical schools in the U.S. date to the 18th century, how does a newcomer define itself? One opportunity may lie in data and technology — the medical instruments of the future. 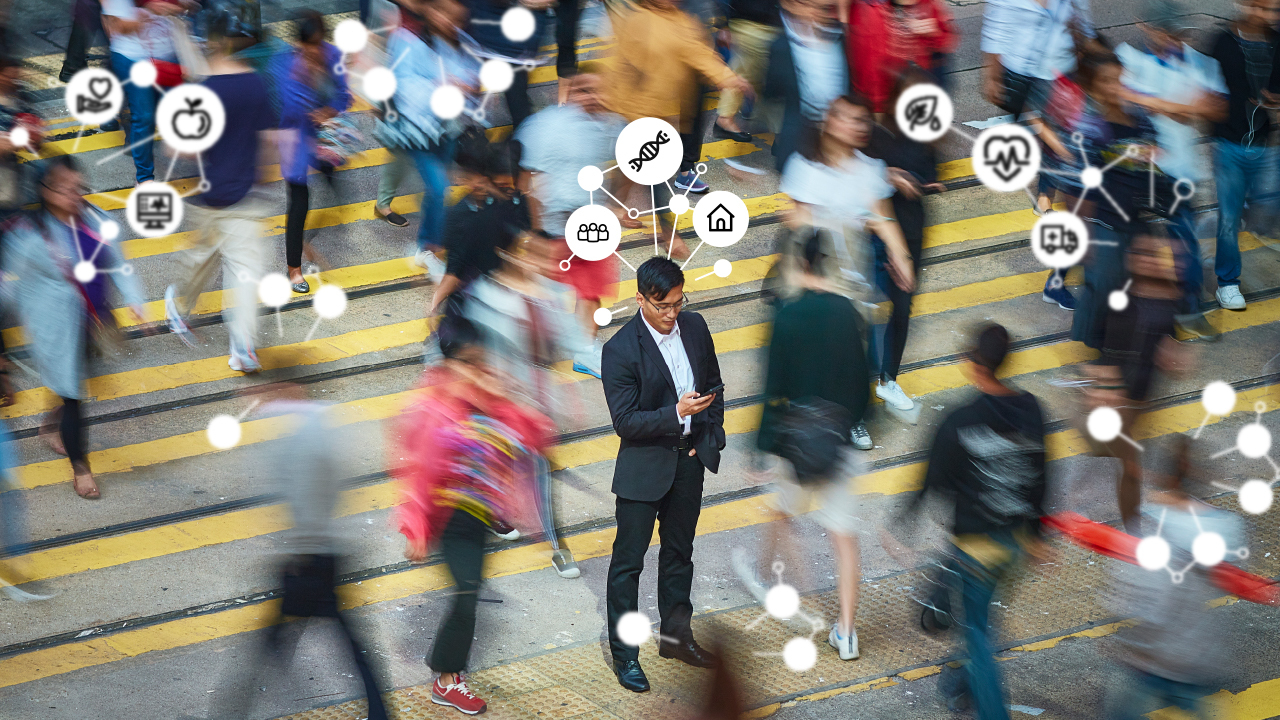 One of the early milestones of the Dell Medical School was heralded by a 2015 press conference held on the rooftop of a parking garage. Behind the podium, cranes towered over the dusty construction site where three buildings were taking shape.

Around the same time, S. Claiborne “Clay” Johnston, M.D., Ph.D., the inaugural dean, unveiled a less palpable product of work to build the school. It came in the form of a grand mission: to revolutionize how people get and stay healthy.

Data is everywhere, but it’s mostly unusable. Organizing it in meaningful ways will radically — and rapidly — revolutionize how we develop medical knowledge.

Almost five years later, a map is emerging. And one of its key areas of focus, Johnston says, will be data and technology — the medical instruments of the future.

“In a health application, data and technology is about gathering information, creating mechanisms to understand what it’s telling you, and acting on that insight,” he says. “It’s inherently outcomes-focused.” Measuring outcomes — and using that information to ever-improve health and care at the individual and the community levels — is crucial to Johnston and others at Dell Med, home to the Value Institute for Health and Care and one of a growing number of academic departments at American medical schools dedicated to population health.

William M. “Bill” Tierney, M.D., inaugural chair of that department, is internationally recognized for his research in biomedical informatics and clinical database epidemiology. While CEO of the Regenstrief Institute, he led the implementation and study of electronic medical records and health information sharing technologies.

Tierney characterizes data focused on social determinants of health and health information exchange as two likely areas of emphasis for Dell Med. Food deserts are an example of the first. “As a physician, I need to understand if my patients are having trouble getting to a grocery store,” he says. “If they’re buying food at the Kwik-E-Mart because that’s what they can get to, I’ve got to know that before we can have a meaningful conversation about diet.” With the right infrastructure, a patient’s health records could house this information, collected from a variety of sources — and, at a population level, researchers could use the information to understand and solve for factors that may lead to disease and disability.

In order for that to work well, data must flow seamlessly from one electronic health record to another. Health information exchanges like the one in Indiana, where Tierney practiced for 30-plus years, are a crucial link. Patient portals need better integration, too: The current state often requires people to navigate a different system for each clinic they visit, resulting in what Karen DeSalvo, a Dell Med professor and Google’s inaugural chief health officer, calls hyperportalitis.

Measured against most medical schools in the U.S., Dell Med is still firmly in its infancy. But Anjum Khurshid, M.D., Ph.D., director of data integration for the Department of Population Health, sees potential for the school to leverage its youth to embed data and technology as a core area of focus and to act nimbly in pursuit of exploding capabilities in the space.

The prospect that blockchain, the technology that secures cryptocurrencies like bitcoin, might facilitate safe exchange of health information is an example. That application didn’t exist five years ago. Now, Dell Med is part of a partnership that is using the technology to help people experiencing homelessness access their records— and, by extension, needed services.

“Having a forward-looking approach is the opportunity for us,” Khurshid says. “Data and technology teams at established organizations are so engaged in current systems that they don’t have time to look up and say, ‘What’s going to happen in five or 10 years?’

“Think of Kodak or Blockbuster. These were large organizations. Very smart people. But they were so involved in maintenance and operation that they didn’t see transitions that were happening on the technology side that could totally bypass the need for film — or for all those brick-and-mortar stores.”

Other data and technology-driven initiatives underway at Dell Med include:

Aaron Miri, Dell Med’s CIO and a congressionally appointed member of the federal Health Information Technology Advisory Committee, led the technical development of the PROs system. “This was a tech solution that, functionally, did not exist,” he says. “Among the challenges is the fact that nationally adopted standards and benchmarks are missing, and mapping data into a health record absent those standards can be difficult. But I’m immensely proud of how our physician and faculty leaders have focused on data-driven practices. We were able to build a system that supports clinical decision-making and offers care providers real-time notification of things like severe depression that might otherwise be undetectable in patients.

“It’s demonstrated clinical uses of technology like this that will unlock the precision medicine of the 21st century, and it all starts with the data.”

Amy Young, M.D., is chief clinical officer at UT Health Austin. “This innovation shows patients that they are improving,” she says. “It also shows providers and care teams that they are objectively improving care for thousands of patients in Central Texas.

Proof of concept is in evidence at UT Health Austin’s Musculoskeletal Institute, one of the first clinics established there. In part by informing shared decision-making — a process designed to prioritize outcomes that matter to patients detailed by executive director Kevin Bozic in a 2017 article in NEJM Catalyst — the focus on patient-reported outcomes data has resulted in an overall reduction in the percentage of patients treated surgically while significantly improving the self-reported functional status of most patients treated for chronic hip or knee pain.

Khurshid, the data integration leader, cites the Musculoskeletal Institute outcomes as important examples of an edge that academic medical centers have over the data and technology industry: the ability to improve real-world applications rapidly thanks to ready access to clinical environments.

“Our potential to begin to lead in this space very soon is not based in size,” Khurshid says. “It is not based on numbers. It’s not based on geography. It’s based on ideas and collaboration. And the ability to test and fail and then test again.”

Johnston, the dean, sees not just opportunity, but responsibility. “Data is everywhere, but it’s mostly unusable,” he says. “Organizing it in meaningful ways will radically — and rapidly — revolutionize how we develop medical knowledge about everything from the health benefits of breastmilk consumption to what causes Alzheimer’s.

“We’re training physicians today who will practice in 2060. They need to be ready.”