Stop the Bleed, Save a Life

Three undergraduate students at The University of Texas at Austin are leading efforts to increase access to trauma training and resources. 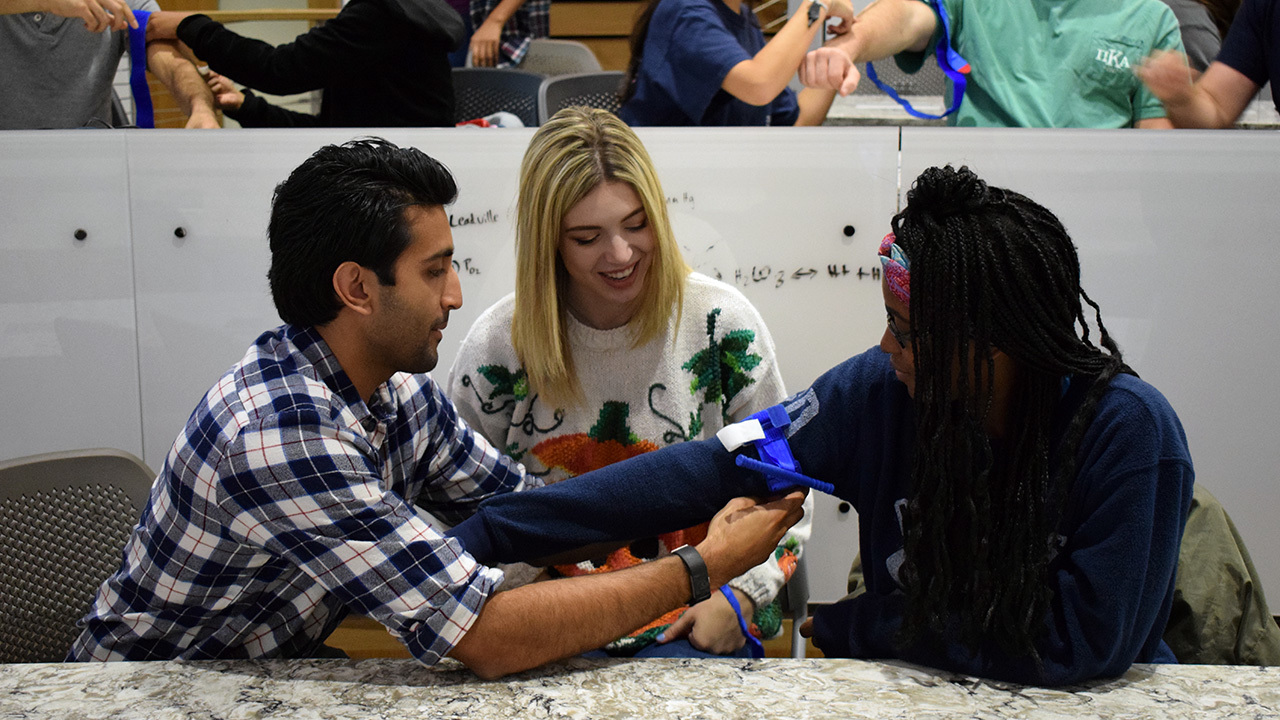 On May 1, 2017, four people were stabbed outside Gregory Gym, on the campus of The University of Texas at Austin. In the aftermath, bystanders reported feeling helpless as victims awaited medical assistance.

For undergraduate Claire Zagorski, this was her call to action.

“I was already passionate about trauma education,” she says. “But after this brutal attack on our campus, I was more determined than ever to bring bleeding control education to UT students. There are simple, straightforward things that anyone can do to save a life.”

Zagorski, 33, has worked as a local paramedic and emergency medical technician for nearly eight years. She earned her bachelor’s degree in anthropology from Texas in 2006 and later returned to the university to complete her pre-med requirements.

After the stabbing, which claimed the life of freshman Harrison Brown, 19, Zagorski participated in Dell Medical School’s Health Leadership Apprentice Program, a 10-week experience that provides undergraduate students the opportunity to propose and implement projects that can transform health care and benefit the community. Zagorski dedicated her time to launching the Longhorn chapter of Stop the Bleed, a free, open-access bleeding education program sponsored locally by Dell Med.

The program is part of a larger Stop the Bleed national awareness campaign and call to action established by the Obama administration in 2015 after the shooting at Sandy Hook Elementary School in Newtown, Connecticut. The training was designed by the Hartford Consensus, a group convened by the American College of Surgeons, including members of the medical community and representatives from the federal government; the National Security Council; the U.S. military; the Federal Bureau of Investigation; and governmental and nongovernmental emergency medical response organizations.

Zagorksi learned of the initiative while attending the Austin Trauma and Critical Care Conference hosted by Seton Healthcare Family, part of Ascension, in 2016. She hopes the trainings will empower her fellow Longhorns to act with confidence when faced with a bleeding emergency, whether caused by a traumatic event like a shooting or stabbing, or a simple household accident.

You can bleed to death from an injury in a matter of minutes. It’s not an issue of getting to a hospital — it matters what happens on the scene.

According to the Centers for Disease Control and Prevention, unintentional injury — also known as trauma — is the No. 1 cause of death for people ages 1 to 44. Death from a bleeding wound is the most preventable kind of death in all of trauma.

“You can bleed to death from an injury in a matter of minutes. It’s not an issue of getting to a hospital — it matters what happens on the scene,” Zagorski says. “We want to educate people so they can push through the paralysis you feel when confronted with life-threatening situations.”

During the trainings, Zagorski teaches participants how to properly apply pressure to wounds, how to use tourniquets and how to pack wounds using hands-on exercises. More than 120 students, faculty and staff across the university attended her first two sessions in late October.

For Laurie Saurborn, a lecturer in the Department of English, the training was a much-needed reminder of the steps anyone can take in the face of trauma.

“It’s helpful to hear that applying pressure actually works — and to learn that the location of the wound can determine how you treat it,” she says. “I feel much better prepared to act if I ever find myself in an emergency situation.” 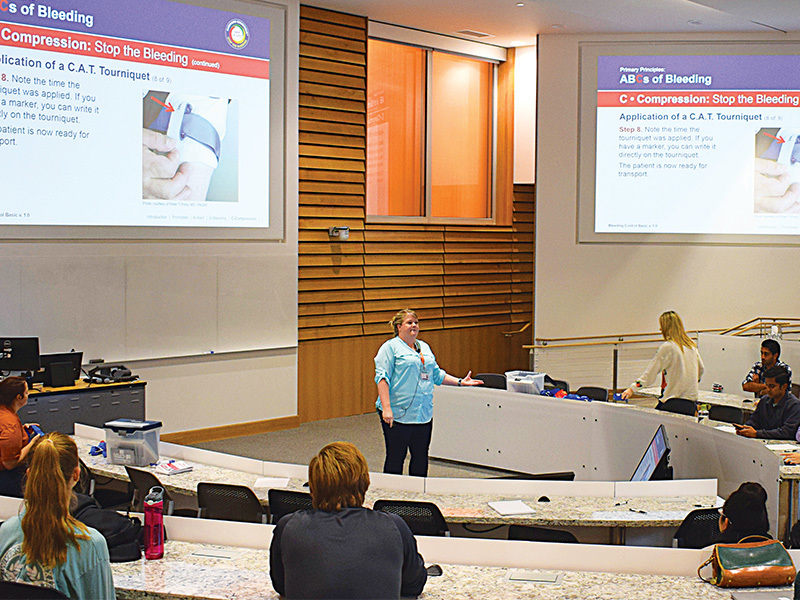 Claire Zagorski addresses attendees at a Stop the Bleed training.

Mari Spurgers, a third-year, pre-med undergraduate student majoring in biochemistry and Japanese, says she signed up for the training so she could help educate others.

“I want to know how I can help in these tragic situations, and I want to be able to share my knowledge with others,” she says. “I’m really interested in public health, and the more people who are educated about this, the safer we are as a community.”

As she expands her efforts, Zagorski is working with Dell Seton Medical Center at The University of Texas’ trauma program, which has provided Stop the Bleed trainings since late 2016 for groups at the university and across the city, including The University of Texas Police Department, staff at Darrell K. Royal-Texas Memorial Stadium, the Frank Erwin Center, nursing staff at Austin Community College and Seton security. Kevin Rix, injury prevention coordinator at Dell Seton, coordinates volunteer trainers — all physicians, nurses and EMTs — to meet high levels of demand for the course in the Austin community. To date, the team has trained more than 800 individuals during 32 classes.

“We are excited about the prospect of joining resources with the university and hosting even more trainings so we can have a larger impact on the UT community,” says Carlos Brown, M.D., associate professor of surgery and chief of the Division of Acute Care Surgery at Dell Med, who oversees the initiative. “It is critical for us to be prepared as a campus, as a community and as a city to respond to a mass casualty incident at a moment’s notice. There’s no magic to hemorrhage control — in fact, the approaches we teach in the classes are the same ones we use when faced with severe bleeding in the operating room.”

While the trainings teach participants how to handle a bleed without any medical supplies, instructors also demonstrate how to use equipment found in trauma kits. Emily Burns, a fourth-year Plan II Honors and pre-med student, and Louisa Angly, a fourth-year pre-med student majoring in public health and biology, began working with the office of Campus Safety and Security in late 2016 and lobbied to get appropriations from UT Student Government to have trauma kits installed in 10 libraries and dorms across campus. They have since partnered with Zagorski to garner support for Stop the Bleed trainings.

“We’ve worked so hard to get the funding for the kits and the support for this program. It’s exciting to see how many people have showed up to get trained,” Burns says. “This is such an easy thing to learn, and it can save lives.”

Since Burns and Angly began their initial efforts, Campus Safety and Security has received more than $400,000 in funding from the university to install trauma kits in all 160 campus buildings as part of a larger campus safety initiative. Each building will include a safety hub location with a public-access automated external defibrillator, push-button emergency phone, building address information and at least two trauma kits. Ten high-traffic locations on campus — including the Perry-Castañeda Library, the Texas Union and the Student Activity Center — will be equipped with larger multi-kits that include 10 of the smaller trauma kits. UT Police Department patrol cars will also be outfitted with multi-kits. Kit installation will begin at the end of 2017 and should be completed within the 2018 calendar year.

“All told, there will be about 700 hemorrhage control kits on campus,” says James Johnson, director of Fire Prevention Services and Emergency Preparedness. “This is a far-reaching process that began because of the initiative and passion of three young students. We are very impressed with the fortitude they’ve shown and believe this is an important partnership for the university.”

Campus Safety and Security is also committed to working with Zagorski and her team, the Dell Seton trauma program and other local partners to provide more opportunities for training. As they expand their efforts, they hope more Texas students, staff and faculty will be ready to use these sophisticated kits and resources if and when they are faced with bleeding emergencies on campus and beyond.