Nick Christian is an important link to community for his neighbors recovering from homelessness — an ambassador fostered by a unique residency program. 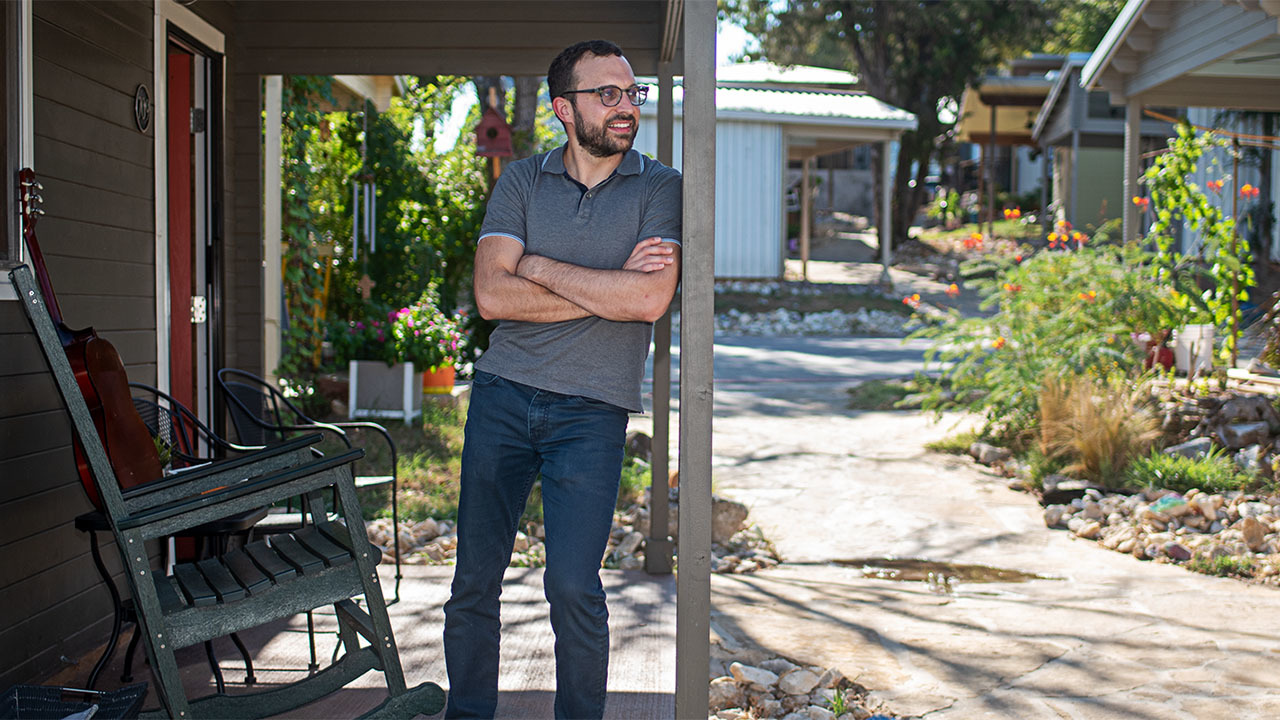 Whether you’re a newcomer at Community First! Village or one of 200-plus people who live there, it’s clear that all are welcome in Nick Christian’s tiny home. Conversation is easy. When neighbors drop by with instruments in tow, the music goes on for hours.

Community First! Village is an Austin development built by Mobile Loaves & Fishes specifically to support those who have experienced chronic homelessness. Christian, M.D., is a resident physician — a doctor in training, under the supervision of attending physicians — specializing in internal medicine at Dell Seton Medical Center at The University of Texas. He doesn’t come from a background of homelessness; his journey to his new home has resulted from the values he’s practiced since before becoming a physician.

“I love my neighbors as though they are my brothers and sisters, so I want to help them as much as possible,” Christian says. “Even though I don’t provide direct treatment for them, it has shown me how powerful something like home visits can be, when you can fully understand the environment and background a patient is living in every day.”

Shortly after moving to Austin, Christian — whose interest in medicine first came when he helped launch a mobile clinic in his native Ohio — read “Welcome Homeless” by Alan Graham, founder and CEO of Mobile Loaves & Fishes and the visionary behind Community First! Village. Compelled to visit the community, he immediately found himself at home surrounded by fellow musicians and fast friends. He applied to be a “missional,” one of 20% of residents whose background is not from homelessness.

Following his official move in fall 2019, Christian feels more sure than ever that he has truly come home.

“Missionals like Nick play an integral role around Community First! Village as one of the many befrienders that neighbors encounter when they move into the village,” Graham says. “Like shepherds around the community, they serve as direct points of contact for our residents and help them get assimilated to their new neighborhood after years of living on the streets. Nick and others who serve in a mission-focused capacity are extremely helpful in filling the relational void that all of our formerly homeless friends have experienced from their time on the streets.”

A key factor in Christian’s decision to move to Austin for residency in the first place was Dell Medical School’s then-new Distinction Program for Care Transformation, which provides residents in select specialties the opportunity to complete independent work to transform health locally. The program is a unique addition to Dell Med’s graduate medical education offerings, which include more than a dozen specialties through which resident physicians are trained.

“The distinction program is designed to attract and develop physicians like Nick,” says Jonathan MacClements, M.D., associate dean of graduate medical education at Dell Med. “They are prepared to tackle a system of care and lead changes to bring better care to those who are most vulnerable.”

Christian has played a key role in collecting data during the B-Team’s first year in action, and that data already support the effectiveness of the model: In the first year of the program, 50 patients started on buprenorphine therapy, and 41% attended their one-month follow-up appointment — a high retention rate for a population that can be difficult to treat consistently.

Helping Break the Cycle of Addiction

Addiction medicine is a longtime passion of Christian’s. Growing up in a city ravaged by opioid use disorder — and after watching friends and neighbors struggle with and die from it — he’s considering an addiction medicine fellowship as a next step in his career. Already, the personal support he provides to loved ones — whether visiting neighbors at Austin Recovery, or accompanying friends to AA meetings — has opened his eyes to the way substance use disorder manifests outside the walls of the hospital.

“I’ve learned to be more realistic and understanding with my hospital patients,” he says. “The more you understand where your patients are coming from, the more likely they are to connect with the care you’re giving them and the treatment you suggest. I’ve been very blessed by the lessons and experiences my neighbors have shared with me, because they may help future neighbors or patients of mine in some small way.”