We Can Identify Cancer in Just 10 Seconds

It’s possible thanks to a new device developed by UT Austin researchers — including a Dell Med student — who received support from Texas Health Catalyst. 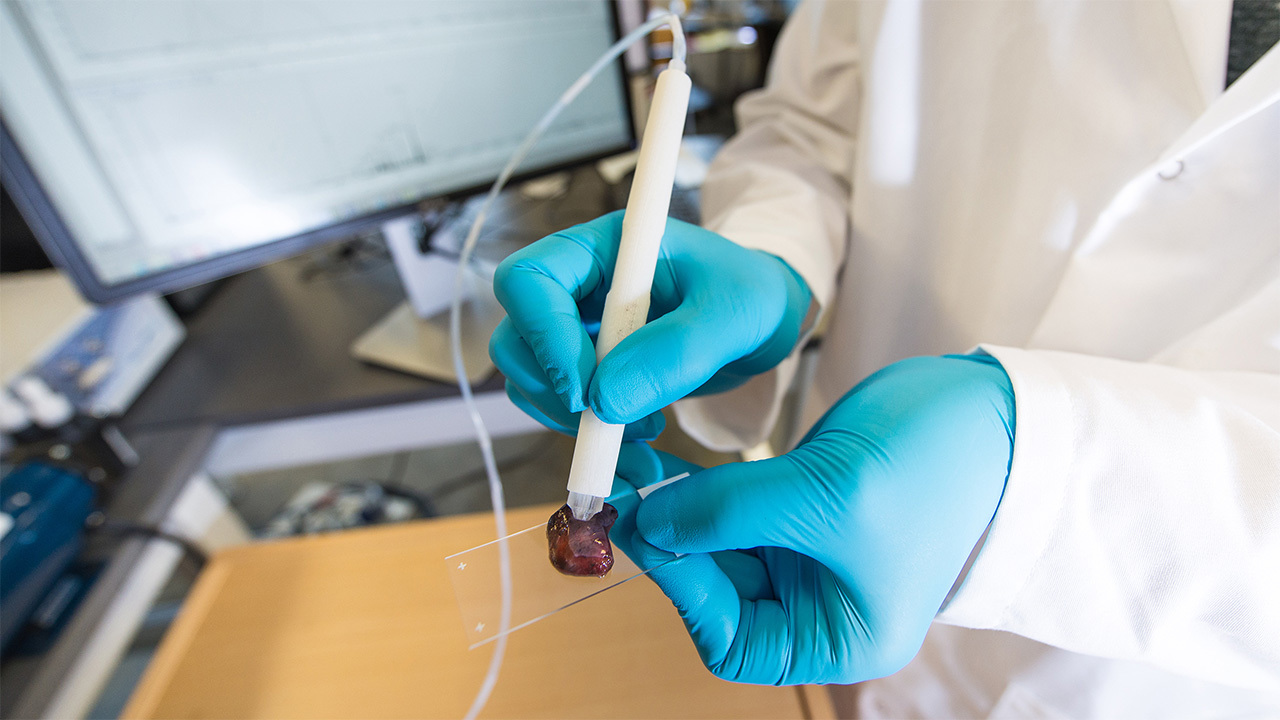 What do you get when you connect leading scientists with health industry experts to innovate? Tools like a cancer-detecting “pen” that allows surgeons to identify cancerous tissue in 10 seconds — 150 times faster than existing technology.

This device called the MasSpec Pen — recently honored with a South by Southwest Interactive Innovation Award — was created by scientists and engineers at The University of Texas at Austin and advanced through seed funding and support from Dell Med’s Texas Health Catalyst program. The program identifies ideas and discoveries with the potential to improve care and accelerates their impact with expert guidance and funding to reach key milestones.

Led by Livia Eberlin, Ph.D., an assistant professor in the College of Natural Sciences, the MasSpec Pen team applied to Texas Health Catalyst with a prototype in hopes of turning it into a viable health product as quickly as possible. The team also included Thomas Milner, Ph.D., professor in the Cockrell School of Engineering, and Michael Breen, M.D., assistant professor at the Dell Medical School and director of robotic surgery at Ascension Seton.

How the Pen Works

The MasSpec Pen works by using a mass spectrometer to analyze the small molecules called metabolites produced by all living cells. In surgery, the physician touches the tip of the pen to the tissue, exposing it to a tiny drop of water. The water droplet captures the metabolites and pulls the molecules up through a tube. In about 10 seconds, the spectrometer returns results identifying if the tissue is cancerous or not. The usual method for determining the boundary between cancer and normal tissue during surgery is pathologic evaluation, a process that takes closer to 30 minutes for completion for each sample.

The handheld instrument gives surgeons precise diagnostic information about what tissue to cut during cancer surgery — expediting the surgery and improving its effectiveness in eradicating the disease. For the patient, the new method helps ensure selective removal of diseased tissue while leaving healthy tissue intact.

At UT Austin, researchers from across disciplines come together to tackle big problems and find solutions that change the world. Part of the Texas Health Catalyst’s role is to bring industry and clinical experts into the mix as advisors on translating discoveries to impact.

“The high potential of the technology was immediately evident, but we were also impressed by the multidisciplinary team and their approach to clinical translation,” says Nishi Viswanathan, director of Texas Health Catalyst. “Not only were they willing to listen to and incorporate feedback from experts, they were also open to exploring other possible applications.

“We're excited to have played a small part in creating a tool with such potential to transform care, and look forward to seeing it in the hands of surgeons.”

Through the catalyst, Eberlin’s team worked with Eric Mayes, CEO of the medical device company Endomag, who provided advice and helped them explore possible business models for commercialization. Stuart Ferris, M.D., a gynecologic oncologist at Dell Medical School, provided clinical perspective, including how the tool might fit into doctors’ workflows. Since such a technology would need FDA approval, Texas Health Catalyst also connected the research team to Elisa Maldonado-Holmertz, a regulatory consultant.

Most recently, Texas Health Catalyst connected the MasSpec Pen team with a leading medical device company interested in the technology. Based on feedback from initial discussions, the team is now working to optimize the pen and conduct clinical testing in preparation for potential strategic partnerships with device manufacturers. The program is also working with the team to bring on an entrepreneurial lead who will spearhead business development and commercialization.

“The role of technology in medicine is to remove barriers and improve care for all people,” says Aydin Zahedivash, a Dell Med student who contributed to the development of the instrument as a UT Austin engineering undergrad in Milner’s lab and continues to be involved. “Having a medical school that acknowledges that and helps to facilitate innovation will change the health care system for the better.”

Other major contributors to the MasSpec Pen project include Jialing Zhang, a research associate at the Eberlin Lab at UT Austin who led the experimental work with other lab members; Anna Sorace, assistant professor at Dell Medical School; Chandandeep Nagi and Wendong Yu, professors of pathology at Baylor College of Medicine; and Jinsong Liu, professor of pathology at MD Anderson Cancer Center.